To continue our celebrations of 100 years of Cubs and making 2016 a year of adventure we set off with great excitement to London.

When we arrived we were shown to the Who am I gallery? where we would be sleeping for the evening. We were soon part of the Purple Detectives and off to the Safety briefing followed by a treasure trail around the Modern Times gallery, we even found the fleece from Dolly the sheep the first cloned animal.

We then found out how the eye worked and learnt about colour and light before making our own lamp. After a snack we were on the go again to see an animal show from slugs to snakes to find out how they used their muscles to work. By then it was 11 o’clock at night and the adults were tired but the Cubs were finding it all very exciting to going back to the gallery where we were sleeping. Not much sleep was had by some!

We were up early for breakfast and then off to the IMAX cinema to see a 3D film on life in the Space Station and looking at earth from space, our last workshop was the route of food through our digestive system and what happened to it along the way.

Far too early it was time to go to the shop and leave and we had a much quieter journey home than we did on the way to London. 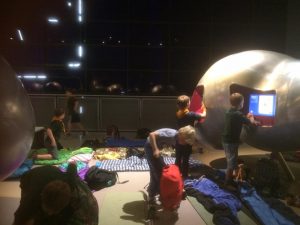 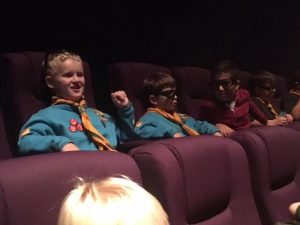 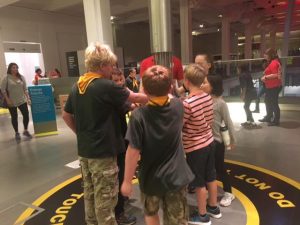